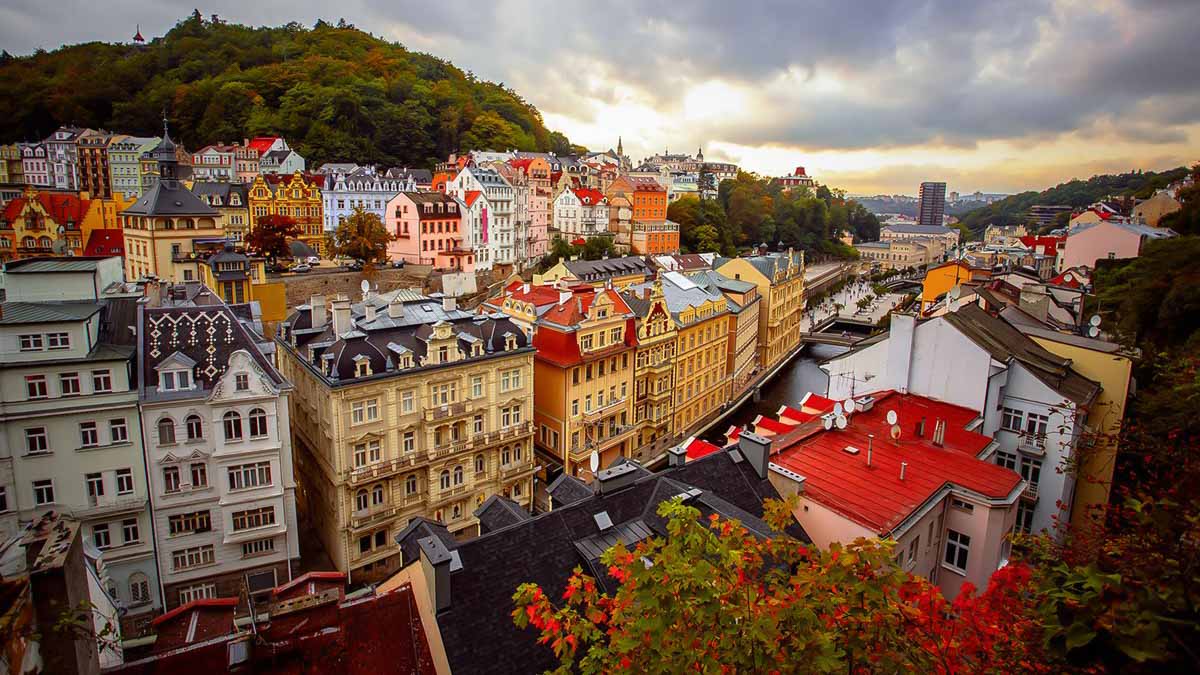 Karlovy Vary is among the top destinations in the Czech Republic. It is very picturesque and beautiful city, located on the northern edge of the Slavkov Forest. The main feature of Karlovy Vary is their mineral and thermal springs, which make the city one big spa resort.

Mineral springs are the basis of the spa treatment in Karlovy Vary. The total number of registered sources in the city is 132, but for medical purposes only 12 of them are used. Most relevant, that according to its chemical composition, there is sodium bicarbonate-sulphate acid water in the local water.

The building of the city started in the early 14th century during the reign of King Charles IV at the site of the Vřidlo settlement. There is a legend in local folklore that the the Czech king was hunting in this lands and injured foot. By a lucky coincidence he saw a spring from the ground and washed the injury. 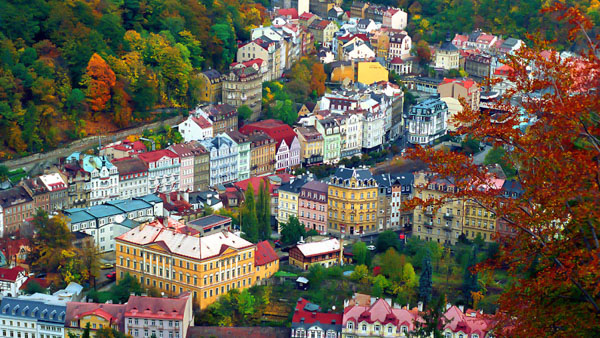 The wound dragged on very quickly and the monarch took it as a gift from God. Less than in a year the settlement received the status of a royal city and began its rapid development.

Beautiful nature and well-known in Europe mineral springs were supplemented with high quality of accommodation and service. It allowed to turn a small town into one of the biggest resorts. Only aristocracy and rich people could afford rest in Karlovy Vary. In addition, here were outstanding figures of culture and art as Goethe, Schiller, Beethoven, Chopin, Paganini, List, Wagner, Freud, Turgenev, Gogol and many others.

Medieval castle Loket is located not far from Karlovy Vary. The ravine of the Ohře River resembles an elbow, so the name of the city takes roots from this fact. For the first time Loket Castle is mentioned in historical documents dating from 1234. Besides, the castle served as a fortress, protecting the country from German conquerors. 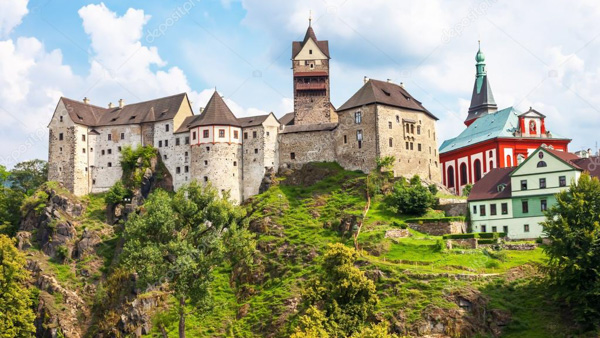 In the 15th century, the structure gradually declined. After a while it turned into a prison, which has been working until the middle of the 20th century. In 1968 here appeared a museum.

A magnificent exposition of porcelain, rare archeological exhibits, former prison and torture chamber, a museum of weapons and many other things will surely interest even an experienced tourist. There are a lot of small statues of gnomes and mythical characters. By the way, from the tower you can enjoy a beautiful panorama of the city.

Interesting fact, that you can see some scenes in Loket castle in the movie “Casino” Royal”. Want to find out more world-famous movies made in Czechia? – Movies shot in the Czech Republic.

All sources refer to one of the five colonnades: Hot Spring, Garden, Mill, Market and Castle. The colonnade is a series or several rows of columns joined by a horizontal overlap. In Karlovy Vary they are independent constructions with bizarre and beautiful architectural ornaments. 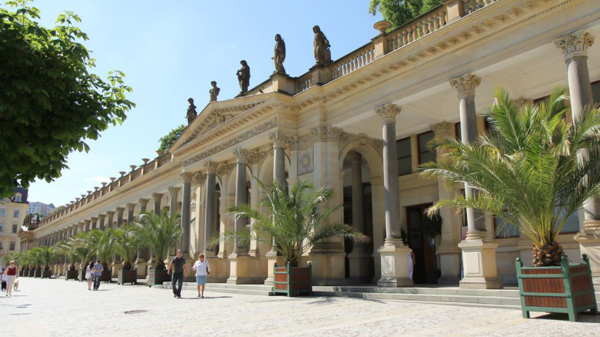 At the beginning of the century before last, the Dresden architect built a pavilion with a gallery in the Empire style. The distinguishing features were in its magnificent furnishings and decor. Then here also appeared a garden and park. The last reconstruction was held by famous architect J. Zitek.

In 1869 he presented a large-scale project in the style of late classicism. The building had a vast area and consisted of three floors. However, the architect implemented a more modest project which we can see today in the Neo-Renaissance style in 1882. 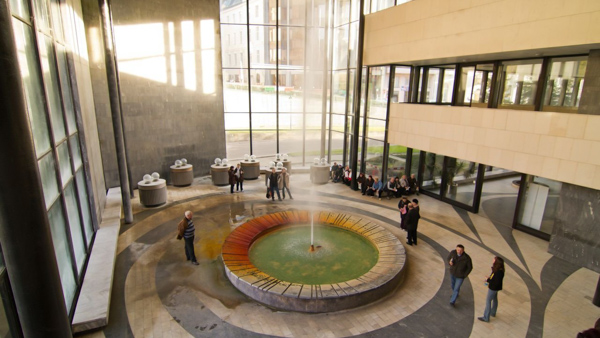 Here you will find the most famous spring of the city – Vridlo with several drinking fountains in the room. The water temperature is 72, 57 and 41 degrees. The temperature of the stream leaving the spring to the surface of the earth is 72 degrees. For others, mineral water goes through cooling by artificial means, while for the treatment of various diseases it needs its own temperature. 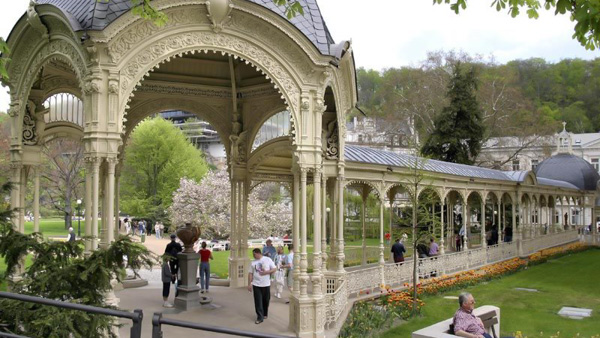 The garden colonnade was designed in the late XIX century by Viennese architects. Then it was part of the Blanensky Pavilion, which was located in the gardens of Dvorak and consisted of two galleries, a concert hall and a restaurant. By the end of the 20th century, the pavilion was abandoned and the city authorities decided to dismantle most of it.

In 2002, Garden Colonnade was reconstructed in cast-iron architecture style with the Stepanka Spring (No. 14). 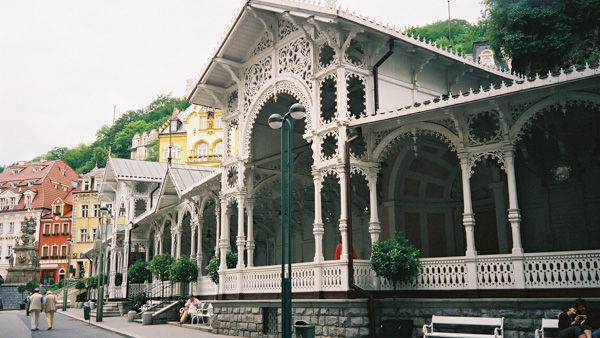 The market colonnade was built in 1883 at the place of the destroyed city hall. Initially, this colonnade was planned as temporary, and the building finished in 1905. In 1993, after reconstruction, it became a historical and cultural monument of the Czech Republic. Besides, there you will find the following springs: Charles IV Spring, Lower Castle Spring and Market Spring. 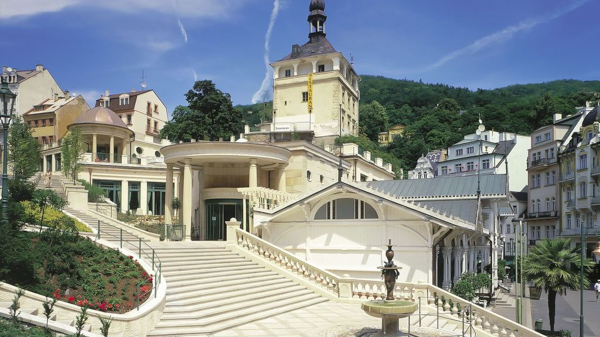 It is located in the old part of the city. A wooden colonnade was built only in 1830. After completion and reconstruction, the building by 1912 acquired its final appearance in the Art Nouveau style. It consists of 3 parts: pavilions of the Upper Castle Spring and Lower (pavilions 3 and 4), pavilion “Solar Bath”.

There is one another thing that made Karlovy Vary famous throughout the world – Czech liquor Becherovka. Josef Becher invented the recipe of Becherovka in 1807 in his pharmacy. Initially, he sold it in pharmacy bottles as gastric drops. But the popularity came soon and it became a big manufacture with liquor bottles with the name “Carlsbad English Bitter”.

The production of liquor has been in a secret for 200 years. The exact ratio of ingredients is a family secret which goes from father to son. Today, only two people know the recipe of “Becherovka” and prepare a mixture of spices and herbs. 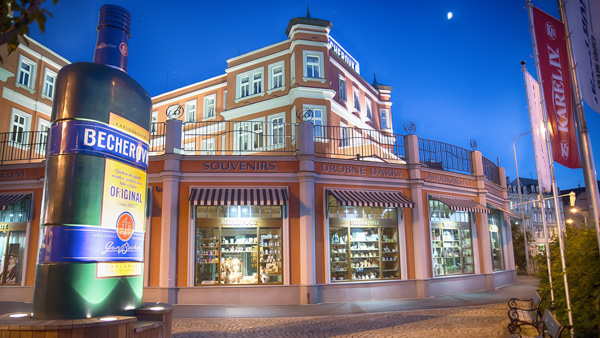 You can try Becherovka in any restaurant or bar. People usually drink it cold or make cocktails like “Beton”.

The Jan Becher Museum was opened in Karlovy Vary in 1992 and located in the building of an old pharmacy. The exposition is dedicated to the world-famous liquor. At the entrance you will feel a pleasant characteristic smell of herbs and spices used in the preparation of Becherovka. During the tour, you can learn about how Jan Becher came up with a drink, about the ways of bottling and also see cellars storing the liqueur.

In addition, here you can see a vast collection of labels and bottles belonging to different historical epochs. At the end of excursion comes degustation of this drink. Of course, there is also a store where you can buy liquor and other souvenirs.

The museum of the glass-blowing offers guests an opportunity to study the history of the enterprise, which counts more than 150 years. This plant is famous for the whole world with its products that were used by the royal courts of Europe from different countries. 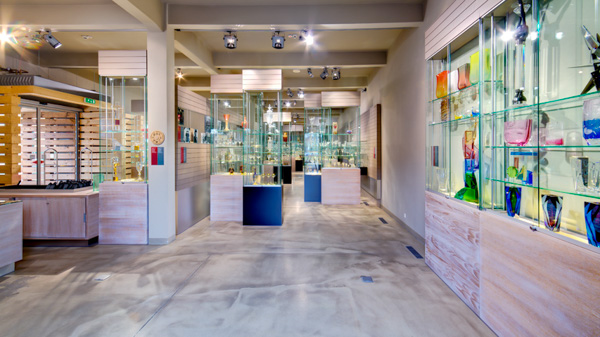 The museum exhibits the most diverse items that the plant produced during its existence and there are about 1000 things in the exposition. In addition, during the excursion visitors will see a short film about the history of the manufactory.

Dvorak Gardens is a small but very beautiful park in the central part of Karlovy Vary. In fact, there are only few alleys with cozy benches, monuments and sculptures. The gardens are named after Antonin Dvořák – the great Czech composer of the second half of the 19th century. According to historical data, Antonin Dvorak was in Karlovy Vary several times. 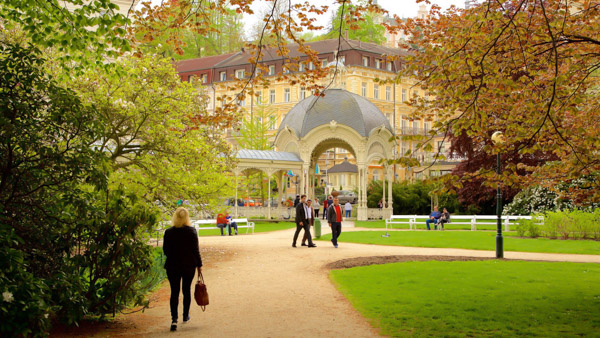 Dvorak Gardens appeared at the end of the 19th century. Their founder was a famous urban gardener who came up with another idea of creating a new at that time and a more modern city park. He planted rosaries and flower beds, oaks and plane trees, maples and chestnuts.

The ancient castle Bečov nad Teplou is located in the western part of the Czech Republic, about 25 km from Karlovy Vary. The complex of the romantic castle and the ancient fortress is a valuable historical monument and the only thing why tourists go to the town.

The fortress in Bečov nad Teplou was built in the first half of the 14th century. The central attraction of the castle is the reliquary of St. Moor, which is open since 2002. Reliquary of St. Moor is a unique sarcophagus of a stunning jewelry work. On the second floor visitor can see the exposition with original antique furniture.

It is probably the most famous observation deck and both tourists and local residents like to spend time there. It is located almost in the center of the resort, consequently offering the panorama on the whole city and the surrounding area: green forests, hills and beautiful houses with red roofs. 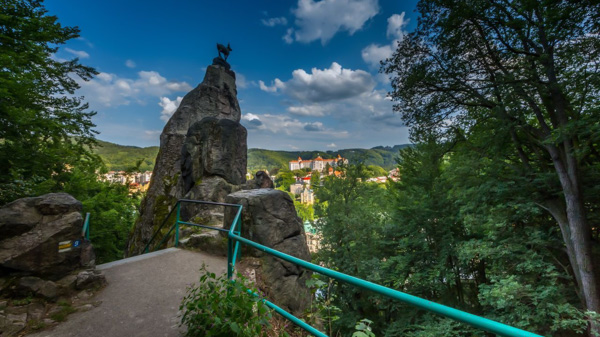 In addition, the “Deer Jump”, named after the fairy-tale sculpture – this creature once pointed the way to the Czech king Charles IV to the city. 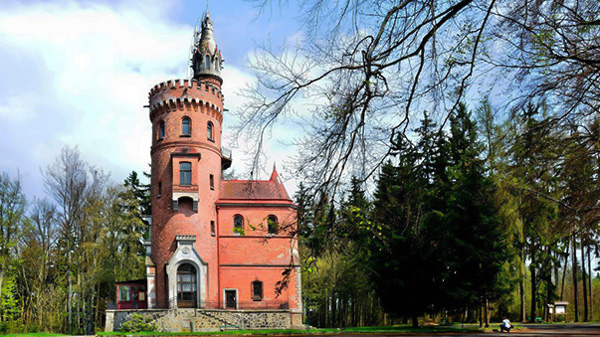 The climb to the tower is quite long and not too easy, but the result is worth doing it.

Johann Wolfgang Goethe liked to climb here and spent long hours, admiring the surrounding nature. The tower of Goethe was designed by two famous Austrian architects – Hermann Gelmer and Ferdinand Fellner. Most noteworthy, that since July 1889 this place has not lost its popularity.

Karlovy Vary Art Gallery displays contemporary fine arts of the Czech Republic. The main building of the gallery is located on the embankment of the river. The gallery has two branches – in Becherova Villa (Becherova vila) and in the Summer Palace of the town of Ostrov (Letohrádek Ostrov), which is located near Karlovy Vary. 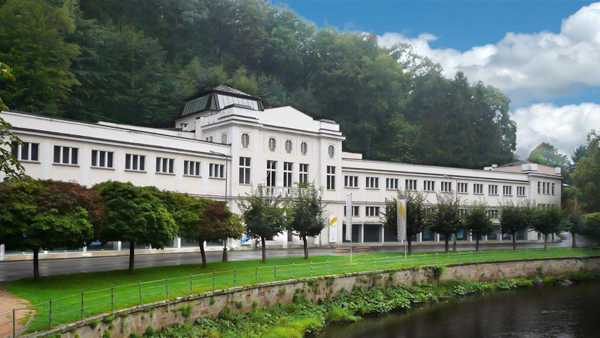 The Art Gallery is a worth part of sights in Karlovy Vary. There is a rich collection of works of art from the end of the 19th century to the present day. Furthermore, they represent the most significant trends of this period – cubism, fauvism, surrealism and others.

About 150 works are exhibited constantly, the rest are changing depending on the thematic exhibitions held in the gallery.

The building represents neo-baroque style, with outstanding luxurious interior. It is not only a historical and artistic monument, but the place where you can enjoy various performances of different genres, concerts of classical music, circuses or ballets. 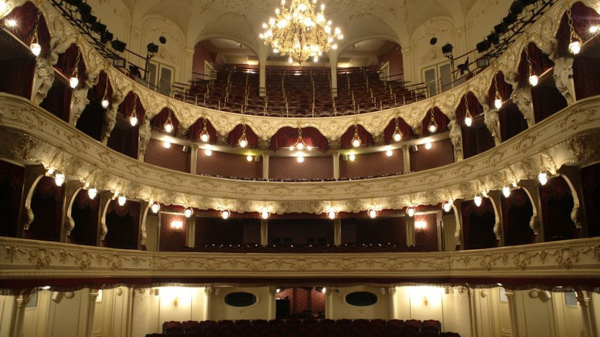 Being in such a beautiful and rich city you will find many interesting things to bring them home or make a gift to relatives and friends. So, let’s look at the most popular items from Karlovy Vary:

Carlsbad has highly developed infrastructure. Of course, there are many places to please even the most demanding gourmets. As in any other city the restaurants specialize both in Czech as well as international cuisine or specific dishes. Nevertheless, here is the list of the best places to dine in: 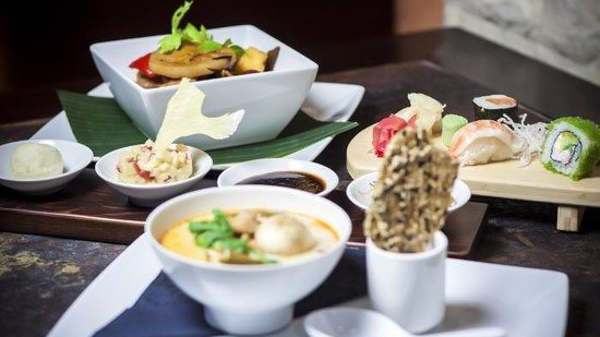 There are the best 5 star hotels in Karlovy Vary: 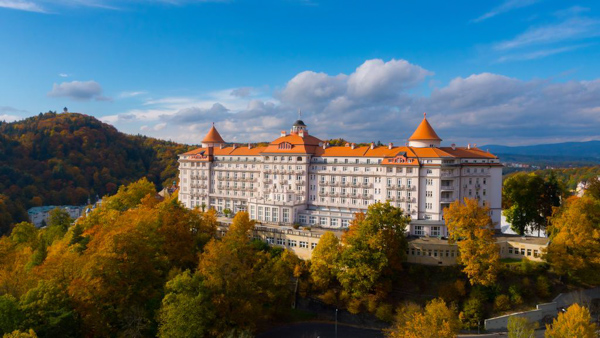 How to get from Prague to Karlovy Vary

There are quite a number of possible ways how to get from Prague to Karlovy Vary. Depending on your travel budget and preferences you may choose: private transfer, bus, guided tour or railway connection. Let’s have a look at each possible means of transport to pick up the best suiting option.

Choosing this way, go to the station Florenc. The first bus to Karlovy Vary leaves at 6.30 a.m. and the last one at 9.30 p.m. The interval is 1 hour in the morning and 30 minutes in the noon. The ticket costs 170 CZK.

The price is relatively not big, reaching up to 100 Euro and you will cover the way in 1.40 hours. In addition, if you want more comfort consider renting a car. The rental price for 1 day will be from 30 to 40 Euro, depending on the class of the car.

Karlovy vary is one of the most popular destinations in Czechia, which attracts people from all around the world. Here we have made the list with all main sights, places to stay and where to eat. But for its healing springs there are also many interesting places closely connected to the history of the country.

In addition, if you want to discover Karlovy Vary in full and get maximum, you can take tour with local guide. He will share experience and widen touristic routes, hence making your trip unforgettable. 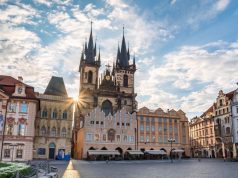 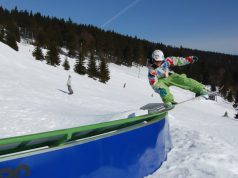 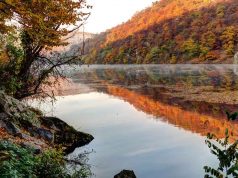 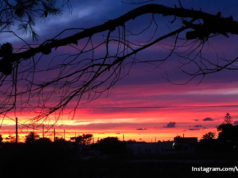 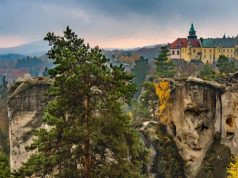 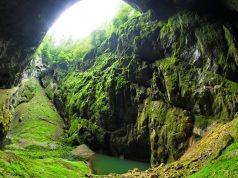 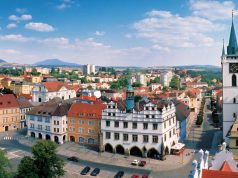 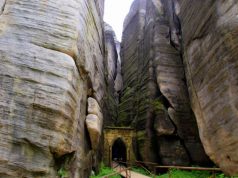 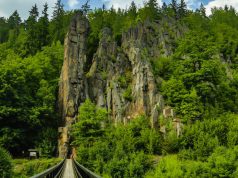 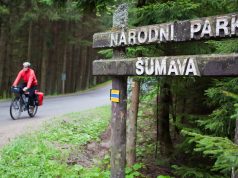