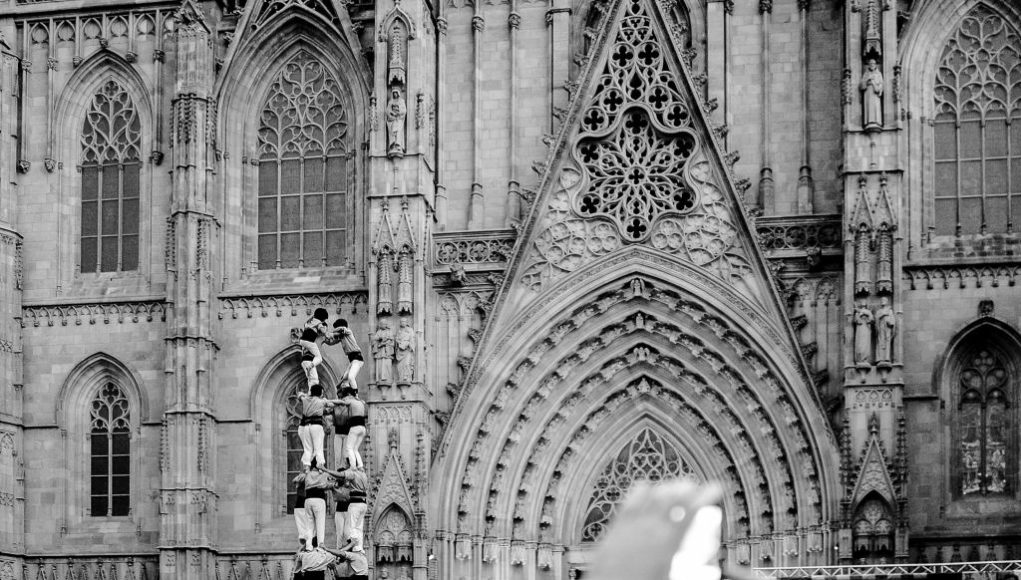 My first trip to Spain was quite hard. One day in Barcelona was enough to understand, that this is the city I love. But it was to little time to discover the places I wanted to see. And this rush I made, was my huge mistake. For you to avoid this failure I compiled the following travel plan.

Unfortunately, all the pictures from that trip are all black and white. My camera was off and I borrowed one from a friend and somehow clicked-clacked it into the monochrome mode.

What to do and where to go?

What to do and where to go if you have only one day in Barcelona? Even my local friends would think for a while, before they start planning in such an unfortunate situation. But all of them were out of the city and I had to solve the question by myself. I read Internet and shaped the circle of places to go and things to do in Barcelona.

To start the trip I took the Metro from the airport and went to La Rambla — the main pedestrian street of Barcelona. My eyes were wide open and heart beating in rhymes of drum and bass. I was in Barca and it was amazing!

Narrow and full of people the most popular street of Barcelona carries up and down millions of locals and tourist every day. Craftsmen make millions of Euros every year on the souvenirs they sell. Thieves help tourists to spend less money on souvenirs. La Rambla breathes with motion and energy.

To buy some fruit and delicious Jamon I dropped in the most famous market of Barcelona located at La Rambla. Market de la Boqueria has absolutely fantastic variety of fruit, vegetables and fish. I don’t publish any photos of the place, since it is a crime to show the products from la Boqueria in black and white.

Moreover it is impossible to share the smells, the sound and the ambiance of the place. In La Boqueria tourists and locals meet in one desire: to buy fresh, meet and vegetables. I was surprised to see huge choice of jamon with the prices from 20-30 Euros per kilo to 1000 Euros per kilo.

If you go to this market have a look at the iron roof. It was built in 1914. And the market counts its history from 1217.

Packed with tasty local Barcelona food I took the way to the statue of the person whose name is known in every country of the world. At the place where La Rambla meets the sea at the height of 60 meters stays Columbus monument. Christopher Columbus points to the sea reminding of his first voyage to America.

It was the first time when I saw such a big Aquarium. And it was in may bucket list for one day trip Barcelona. The size, the amount of animals and the way the exhibition is organized fascinated me.

Of course such a place has too many visitors to solemnly enjoy the underwater life views. But anyway the impressions from the visit to the Aquarium in Barcelona were priceless. Some black and white photos below will show you several of creatures you can observe through a very thick and safe glass.

After a lunch break on the lawn in front of the Aquarium I moved to the museum of football club Barcelona. That was my dream from childhood, since I found the game, the message and mission of this club the best in the world of football.

I don’t want to offend supporters of any other teams, but this is my point of view. Museum reflects the whole long history of the club, tells stories of the players, coaches and people engaged into the life of huge Barcelona family. To my mind this is the best place to buy souvenirs, because they are quite unique and interesting.

I had a strong desire to see the field of Barca and was sure that this option is included into the visit. But unfortunately you have to pay for the entrance and I decided to safe this money and better to come next time and to enjoy the game, not only the empty Camp Nou.

One of the most exciting moments of one day in Barcelona was a show — Human pyramids or human towers. It took place in Gothic Quarters of Barcelona.

This is an ancient tradition of Catalonia. Today it is more about competition and strong desire to be the best. Every team gets ready for the “castell” very properly. On the one hand there are friends-competitors looking at and on the other hand — tourists coming every weekend (during summer period) to the main Cathedral in the Gothic Quarter of Barcelona to enjoy the show.

La Barceloneta was one of the last places to go that day. Now I realize how long and intense it was. And only now I see, how many venues were covered and how many still are to be explored. The main beach of Barcelona was the right place to finish the trip.

Looking at the people playing volley-ball in the lights of laps, singing songs by the fire and enjoying every single moment I caught myself on the thought that my one day in Barcelona is not complete. I missed one of the main attractions, the last and incomplete work of genius Gaudi — the Basilica and Expiatory Church of the Holy Family.

The Basilica i Temple Expiatori de la Sagrada Familia is one of the most expected churches in the world. Gaudi planed and started to build basilica of Sagrada Famila in far 1882. The process is very slow and no-one has any idea of the deadline.

I was lucky to enter Sagrada in the evening during a mess. There were almost no tourists, but the locals how came for the evening pray.

It was hard to feel the power of the construction and its ambiance, because the whole day I was picking up emotions from various attraction and the limits were reached by the time I entered the basilica. But anyway, this place is absolutely a must to visit even during one day trip to Barcelona, even if you are not a religious person.

One day in Barcelona review

It was one, but a very long day. The day full of emotions, smells, tastes and lovely people. This short visit to Barcelona charged me for months forward. And that very day helped me to understand a very important though, I was speaking at the begging of this post:

If you want to see more than it is possible, instead of fun comes fatigue and disappointment instead of joy. So even if it is only one day in Barcelona enjoy it and have fun!

Learn how I save money on hotels in Barcelona.