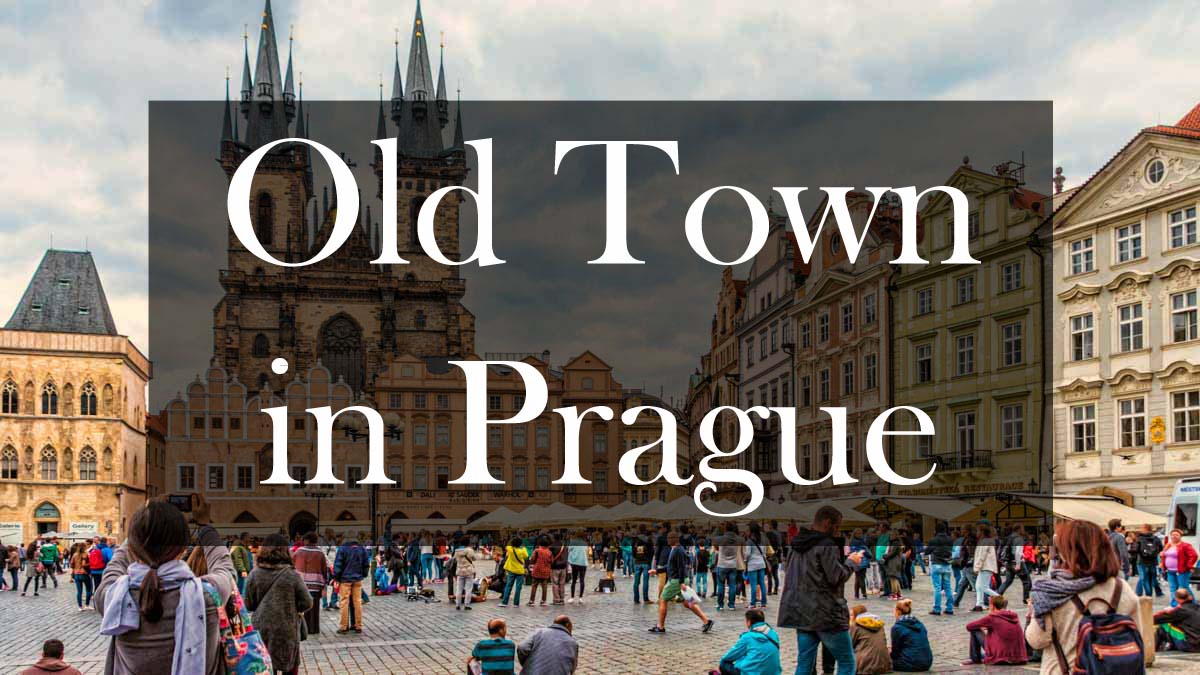 Fantastic, magnificent and great Prague came into existence from the place called Old Town. The Old Town in Prague is the district full of significant monuments connected with history and culture. So let’s find out its history and the main sights to see here.

Old Town is the heart of the city of 100 spires (this is the nick name of Czech capital) and unites numerous squares, styles in architecture, houses, museums, churches, restaurants, galleries, shops, bars and other places of interest. But before going deeper into the tiny streets, let’s have a look at the history of the place.

The history of Old Town began in the IX century. Old Town appeared on a location of a settlement near the market on Vltava riverside. During the reign of the King Waclaw this place got the status of the city and was called Praha. There were about 13 gates and a huge protection wall around the town. As any old school settlement, it looked like a fortress rather than like a town.

And there were the reasons for it. Enemies could come from any side and attack. So to protect the people and their houses, huge walls were raised and high towers built. The former marked the boarder of the city, the latter helped to observe the area. 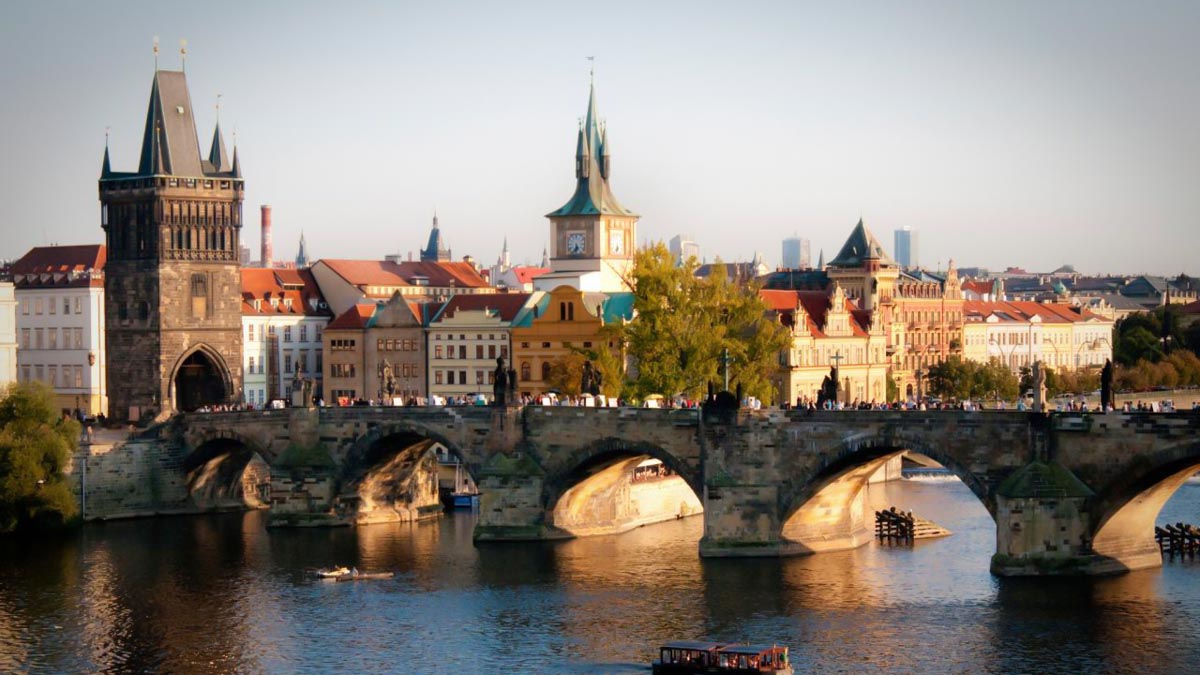 Today we could hardly find any vivid examples of the walls and from all the towers there is one Powder Tower in Republic Square near newly built building of Municipal House. This tower does remember the true old times. Over time Old Town in Prague has acquired many valuable houses, churches, towers and other institutions. It is a complex where every brick has its own long history.

Old Town square is a group of historical buildings of various years. You could see here the features of different architecture styles such as Gothic, Baroque, Renaissance and Rococo. The main attractions are:

It is a starting point for almost all tourists. Charles Bridge is a recognizable Prague landmark built in 1402. The bridge connects two city’s historical parts: Lesser Town and Old Town. There you can see 30 statues and sculpture decorations. Besides, the majority of them represent Baroque style. 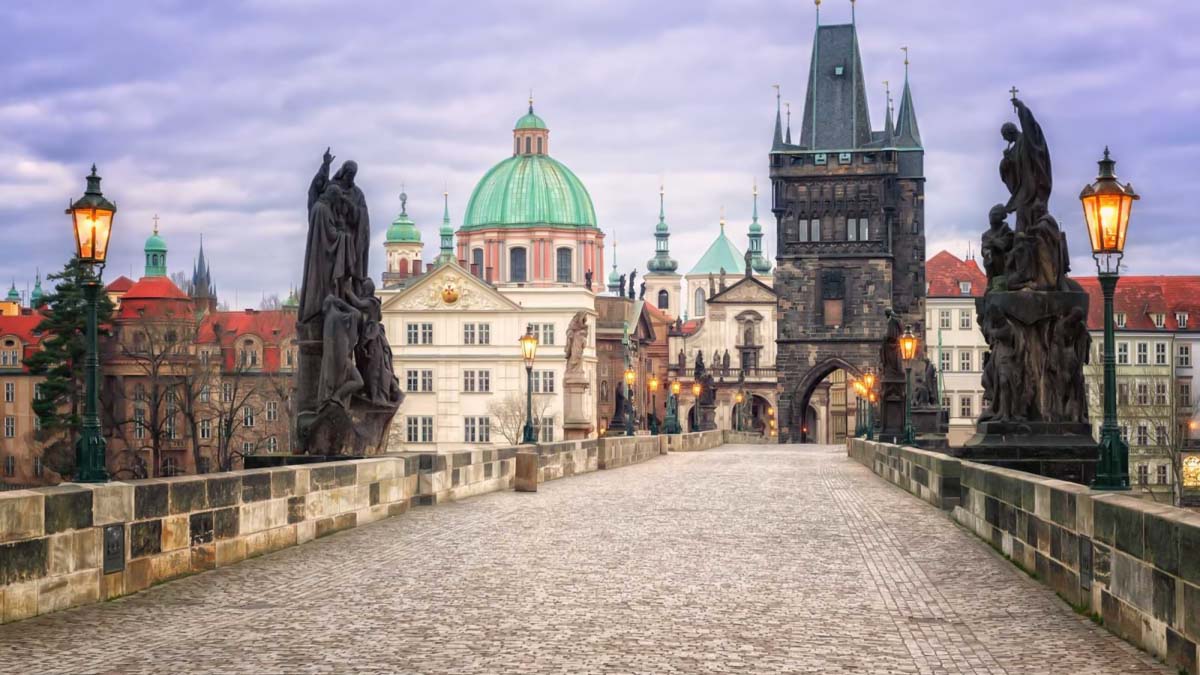 Nevertheless, they are only the exact copies while the original statues are kept in the National Museum.

The name of the Charles Bridge is associated with the Czech King Charles IV. He supervised all constructions and also laid the first stone of the building. This historical event took place on July 9, 1357, at 5:31 a.m. in the Old Czech time. 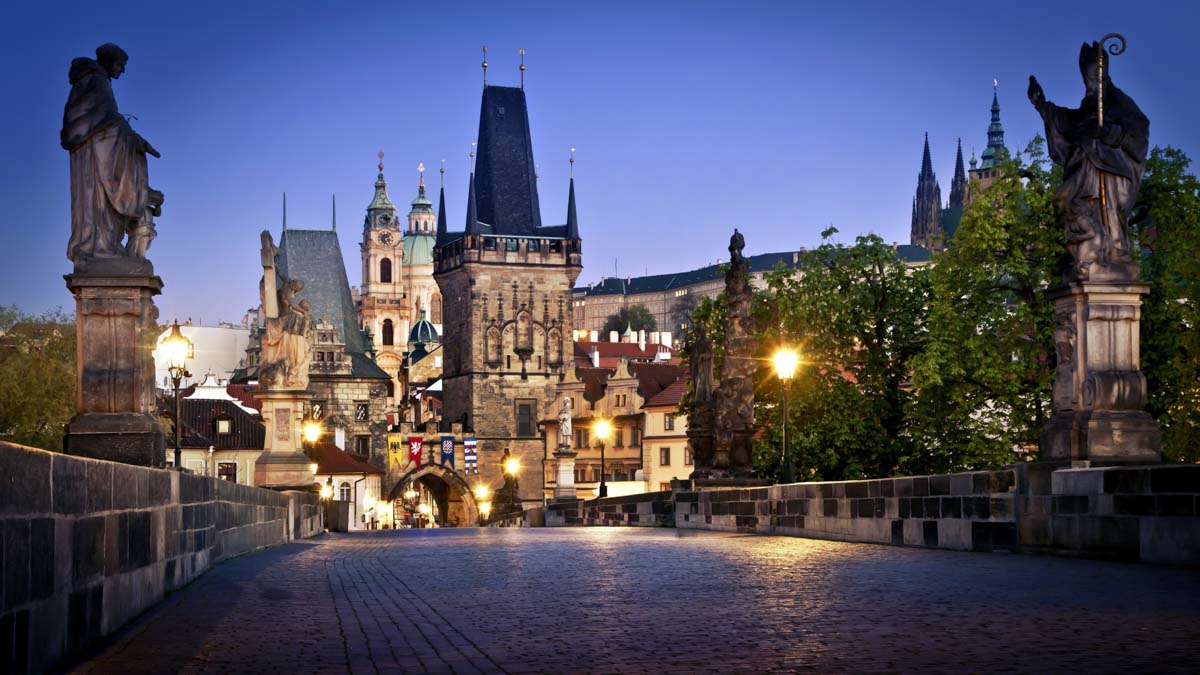 In those days people believed in astrological forecasts, so the date was chosen for a good reason. The numbers participating in both date and time represent odd numbers, namely: 1-3-5-7-9-7-5-3-1.

How to get there

There are three tram stops directly near the Charles Bridge:

Prašná brána reflects the pearl of Czech architecture. It is the Gothic Powder Tower of the XV century, also known as the Powder Gate. Originally the tower was built in the Gothic style as a decoration to the Royal Palace. But about 10 years later its importance was lost. The city didn’t continue the construction of the almost finished building. 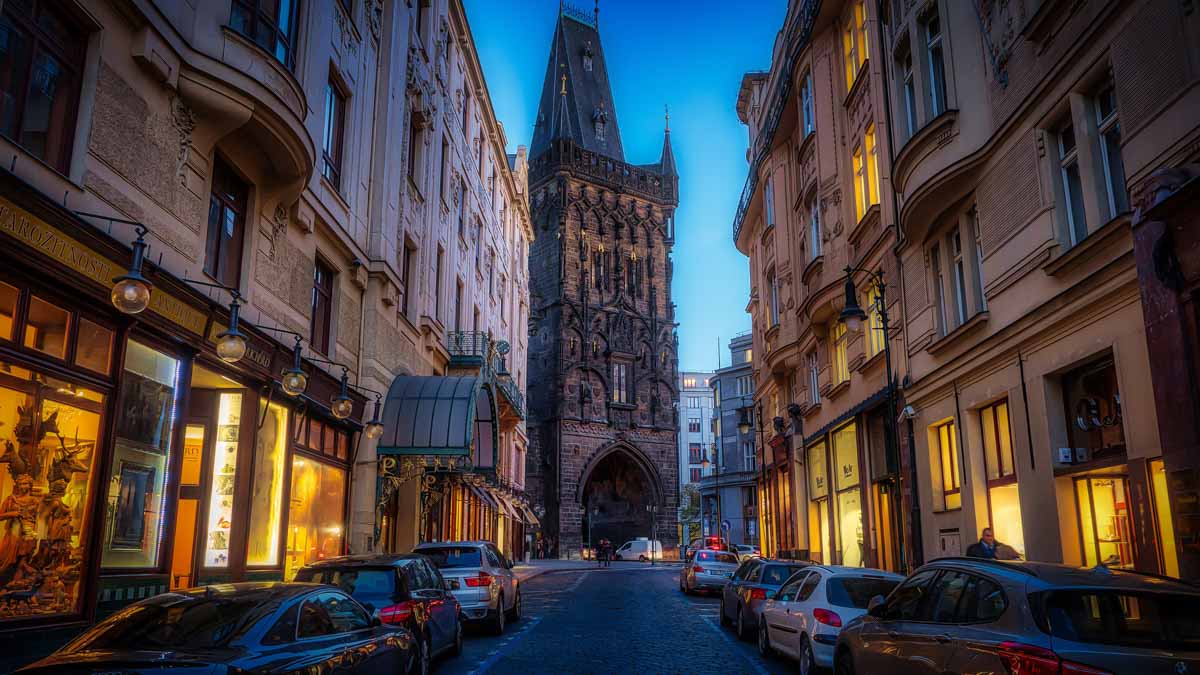 During the restoration at the end of the XIX century, the Powder Tower appeared in a pseudo-Gothic style. There were Neo-Gothic sculptures and other new elements.

The first floor of the tower is decorated with sculptures of Czech kings: on the one hand – Vladislaus II and Jiří from Poděbrady and on the other Ottokar II and Charles IV. Also you can see flying angel above these statues and the lion holding the emblem of the Old Town.

The second floor of the tower is decorated with the coats of arms of cities and lands belonging to Czech kings. The interior harmonizes Romanesque and Gothic styles. 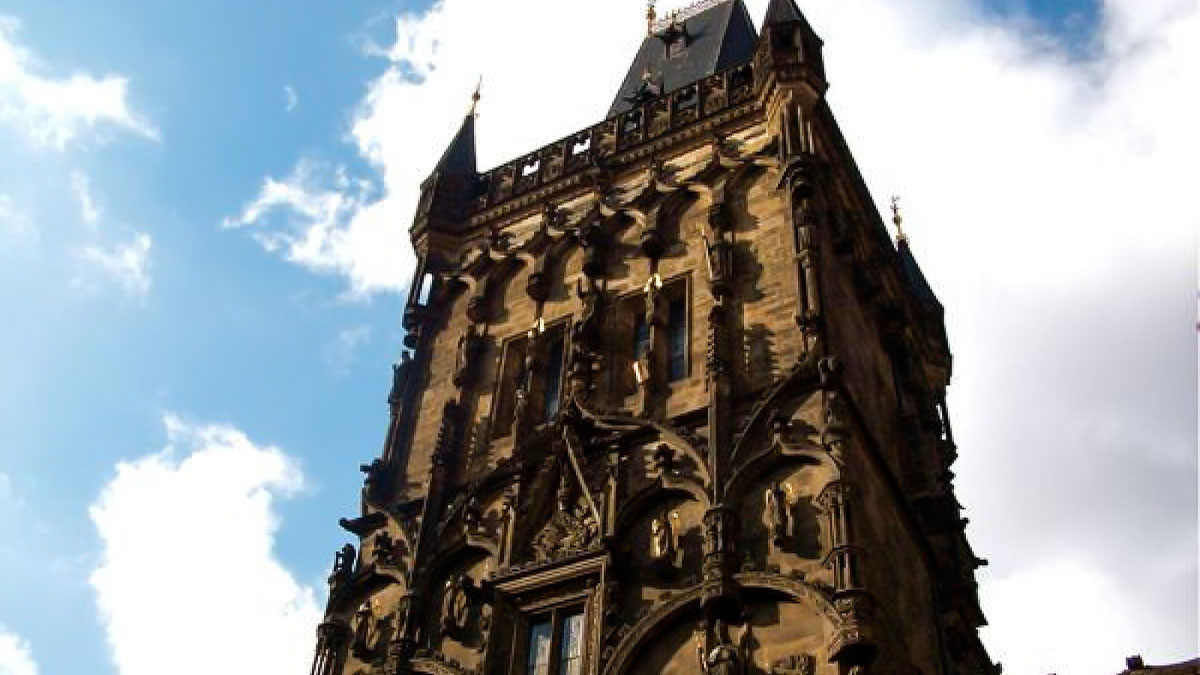 If you are fond of photography, climb up this tower. The roof opens a magical view on the beautiful Prague.

Klementinum is the second biggest complex of buildings in the city after Prague Castle. Once it housed the Jesuit collegiums, and now the National Library of the Czech Republic is located here. 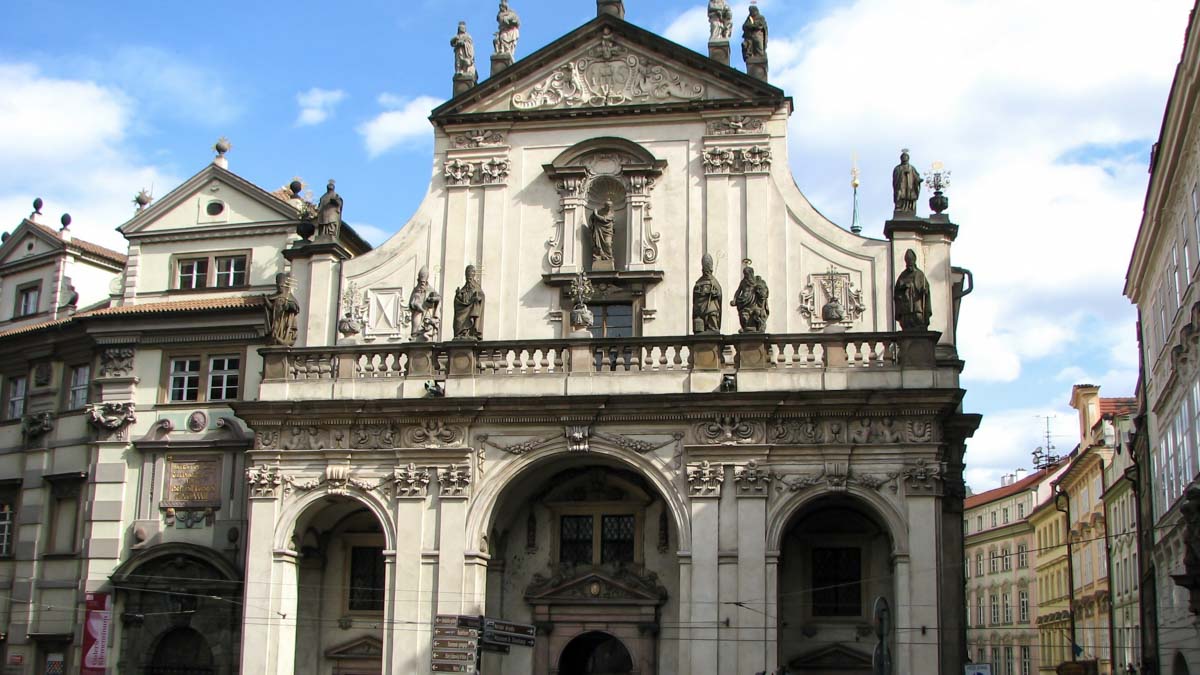 It includes several public buildings dating back to the XVIII century:

Most noteworthy that here great scientist Kepler discovered the laws of planetary motion. 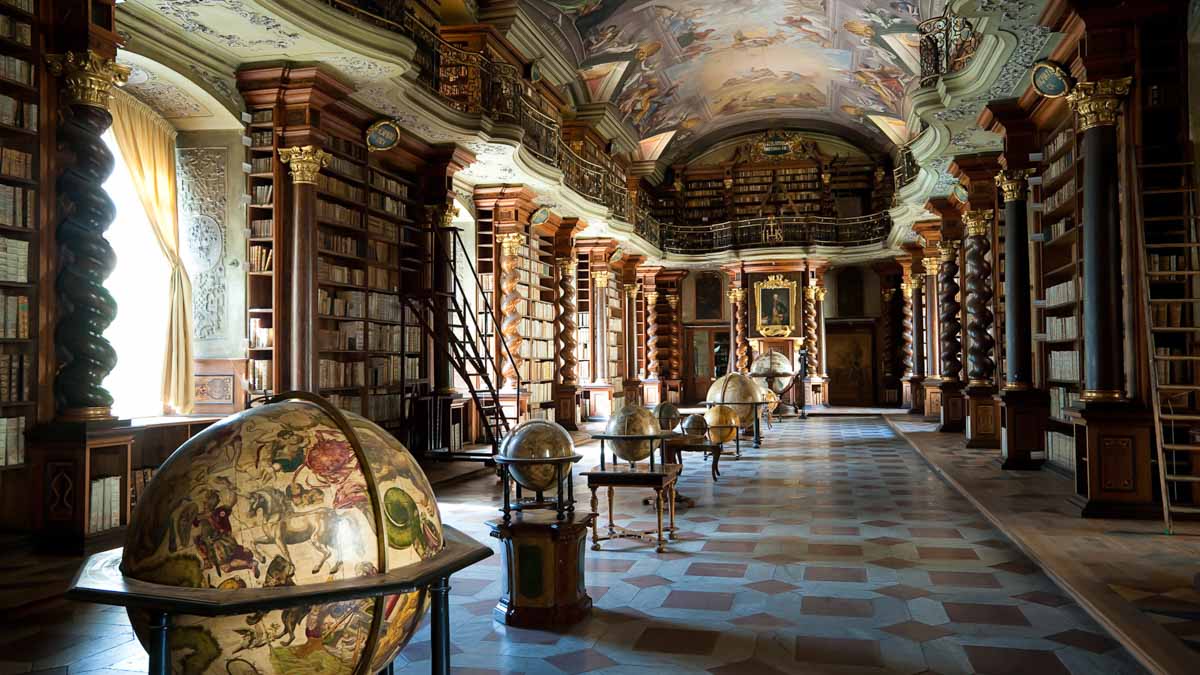 Unfortunately, since January 2017 Klementinum is closed for restoration, preliminary for 2 years. You can enter only the Mirror Hall.

Looking at the Astronomical Clock you will not be able to control time, because of its majesty. It shows three hourly measurements: Central European, Old Czech and star time. In addition to these data, with the help of the clock you can see the zodiacal location of the Moon and the Sun. 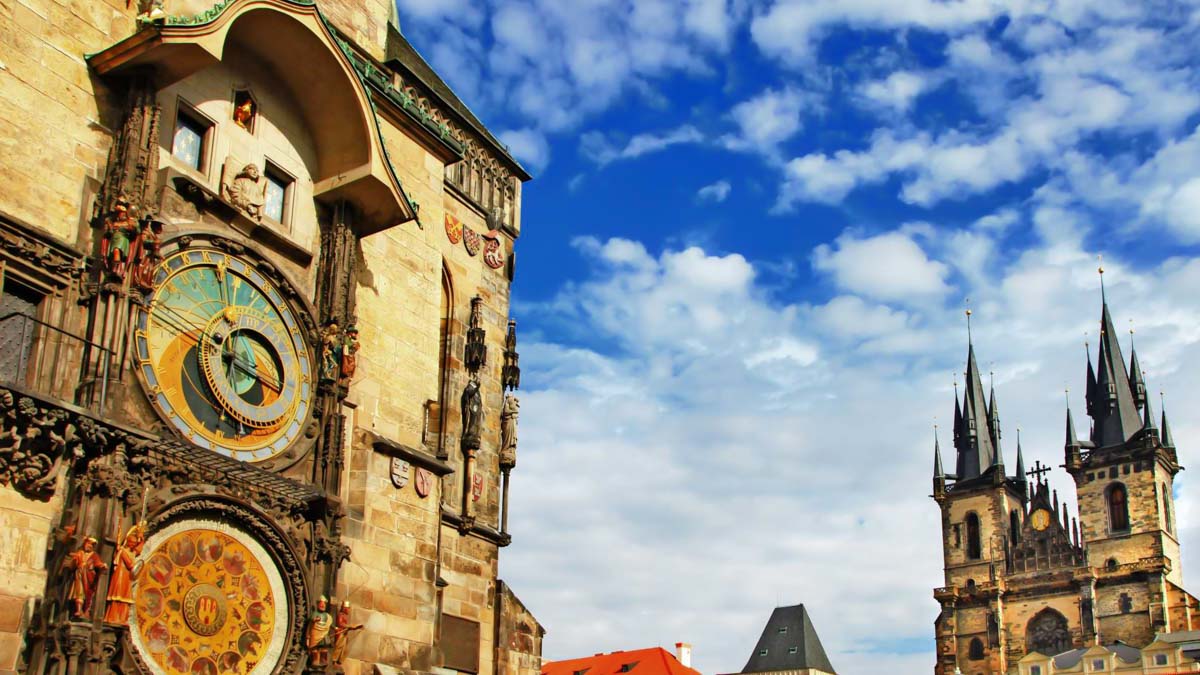 Under the dome of the roof you can see the defender of the building – the cock. This bird meets the dawn and symbolizes courage and vigilance. A little below is a statue of an angel. On either sides are two windows, where you can see the 12 apostles.

Statues on the sides of the clock:

In the center of Prague, on Jan Palach square stands a monumental building in the neo-Renaissance style. Prague Rudolfinum is a true temple of art. It hosts concerts, competitions, festivals and a variety of exhibitions. The first multi-purpose cultural center in Europe was presented to the city by the Czech Savings Bank. 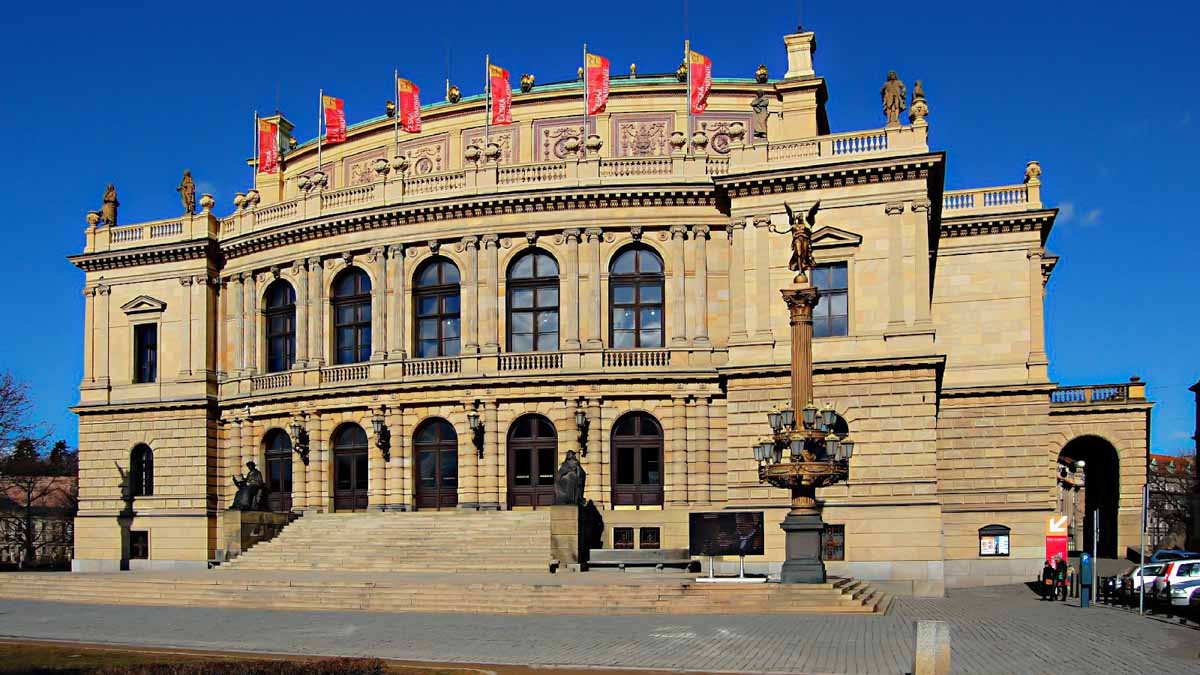 The interior of the building combines neo-renaissance and classical style. The symmetry of the layout successfully divides the space into independent parts.

Work hours of the gallery:

Work hours of the concert halls

A discount of 50% is given to students, disabled people and the elderly.

It is the oldest university in Europe situated in Old Town in Prague. Building works finished in 1348. Today Karolinum is used as an administration building to hold important events, meetings and great ceremonies. There is also a world-famous Charles University on the territory. It was founded in the XIV century, today has 17 faculties with more than 50,000 students from all over the world. 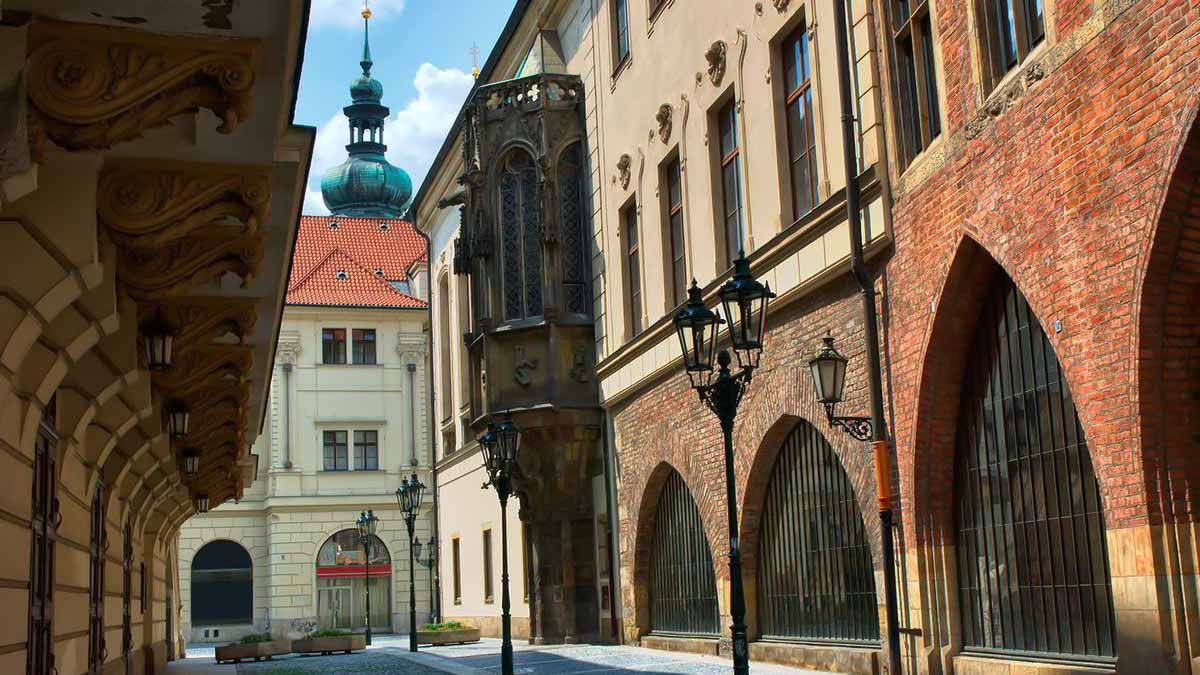 The term of study at Charles University is from 3 to 7 years, depending on the chosen specialization and program. There are more than 300 of them. It is possible to receive education at once in several specialties, both full-time and part-time.

The Church of Our Lady Before Tyn

The Church of the Virgin Mary before Tyn is a significant and unique Prague’s attraction. It is an active church, built in the Gothic style with baroque elements by the famous German architect and sculptor Peter Parler. The construction of the church began in 1339. 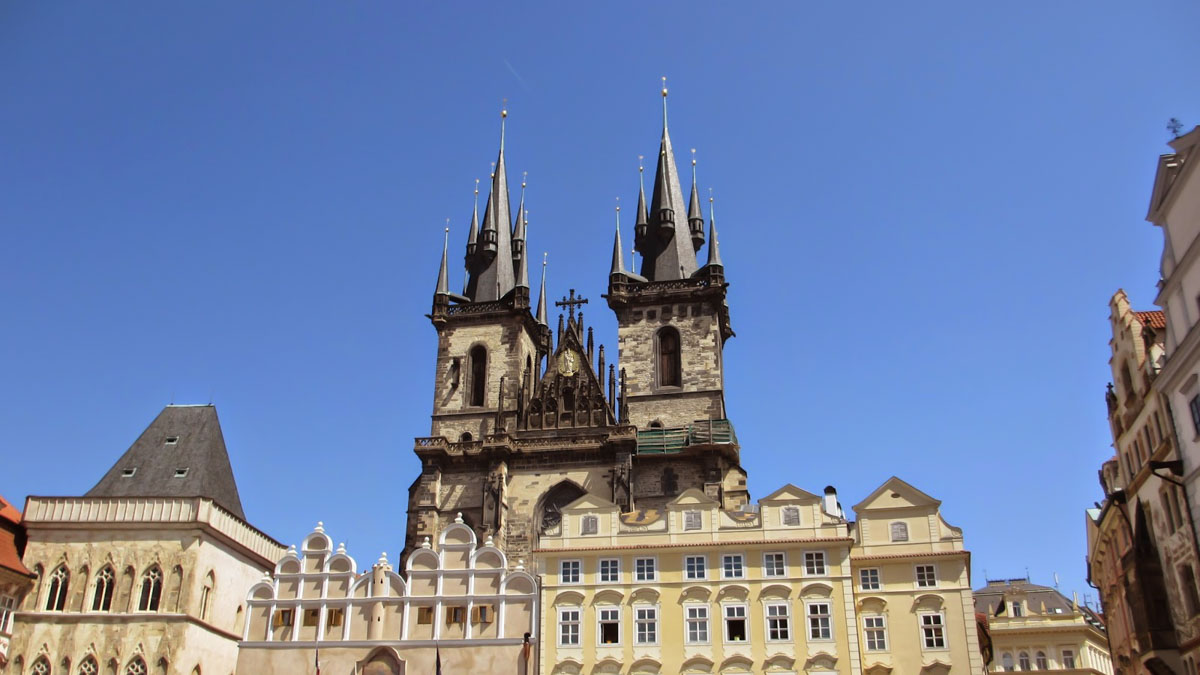 The real jewel among the artifacts in Prague is the old organ. This is the creation of Mundt dated 1673.

There is no entrance fee, but a recommended amount for a donation is 25 CZK.

Catholic church of St. Nicholas is a baroque temple located in one of the most popular tourist places in Prague. Constructors have been building it almost all the XVIII century. They were representatives of three generations of famous German architects Dientzenhofer. 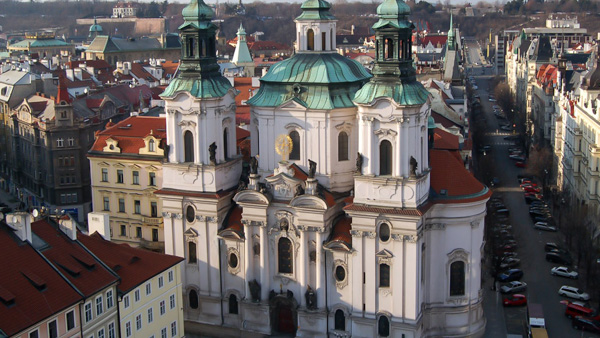 The dome is 20 meters in diameter, which it truly impressive. For two and a half centuries it has changed its color. Copper cover on the domes is green now, but still amazing.

The maximum height in the inside is 49 meters. Nevertheless, it is the highest building’s “ceiling” in the Prague.

The organ was built in 1745-1747 and has more than 4 thousand pipes. Some of them reach 6 meters in height. Wolfgang Amadeus Mozart played on exactly this organ during his visits to the Czech capital. 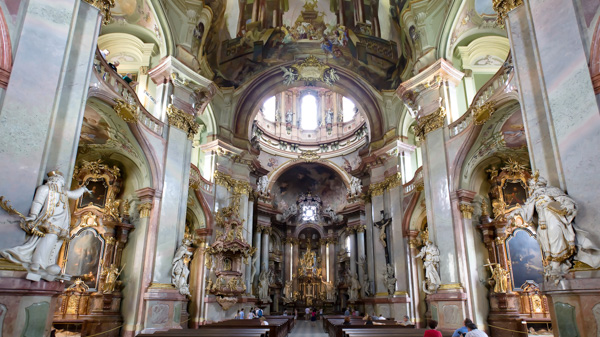 Another popular building in the Old town in Prague is Kinsky Palace (Palác Golz-Kinských). Its façade represents Rococo style in delicate pink and white stucco colors. The architect is Jan Arnost Goltz. In 1948 from one of the balconies Klement Gottwald publicized the beginning of Communism.

Moreover, today there you can see various exhibitions of graphics and art.

There is one very special place in Prague that has no resemblance to any other. Its name is the Jewish Quarter Josefov. There are six synagogues, the Jewish Town Hall, the Jewish Ceremonial Hall and the Old Jewish Cemetery, the most remarkable of its kind in Europe.
The Jewish quarter is located between the Old Town Square and the Vltava River. Its story began in the XIII century. 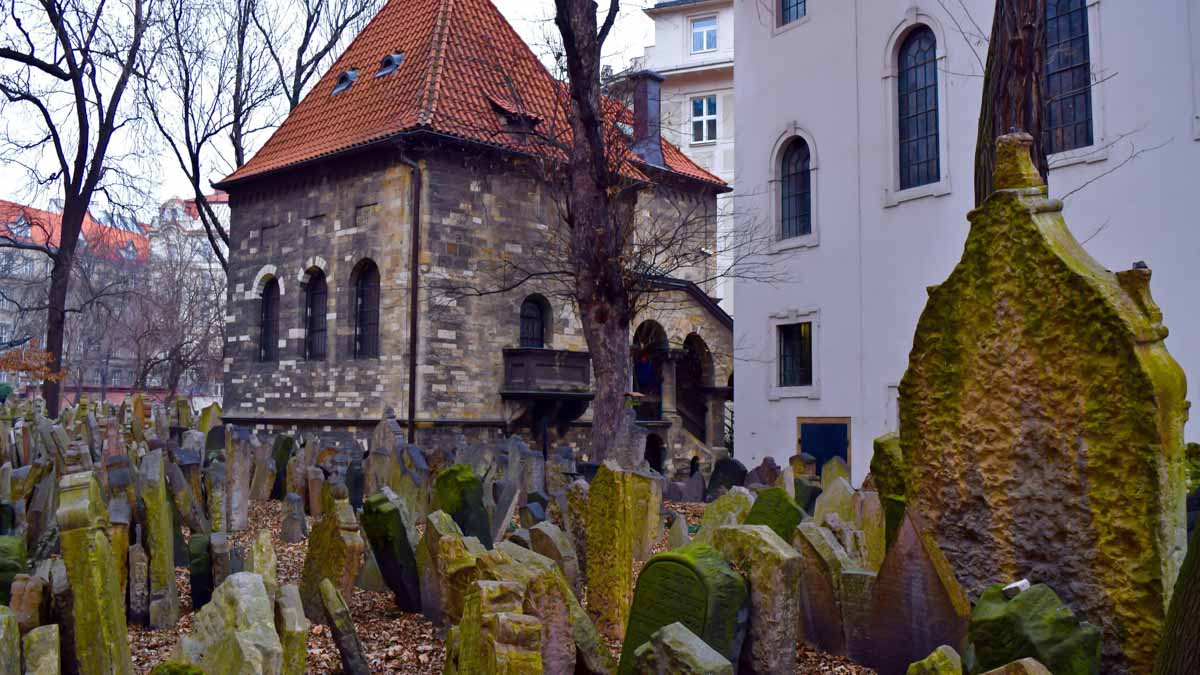 The Jewish community in Prague was forced to leave their familiar homes and move to one area surrounded by a wall. This formed the Prague Jewish ghetto, where the Jews settled their lives and developed their culture.

Nevertheless, only six synagogues remain the former ghetto. The town hall and the famous old cemetery are part of the second largest Jewish museum in the world.

Together with historical landmarks Prague Old Town is rich in the great variety of museums: National Museum, Jewish Museum, Museum of Decorative Arts, Museum of Communism, Mucha Museum and many others. So if the weather is not good for long walking you are welcome to a museum. 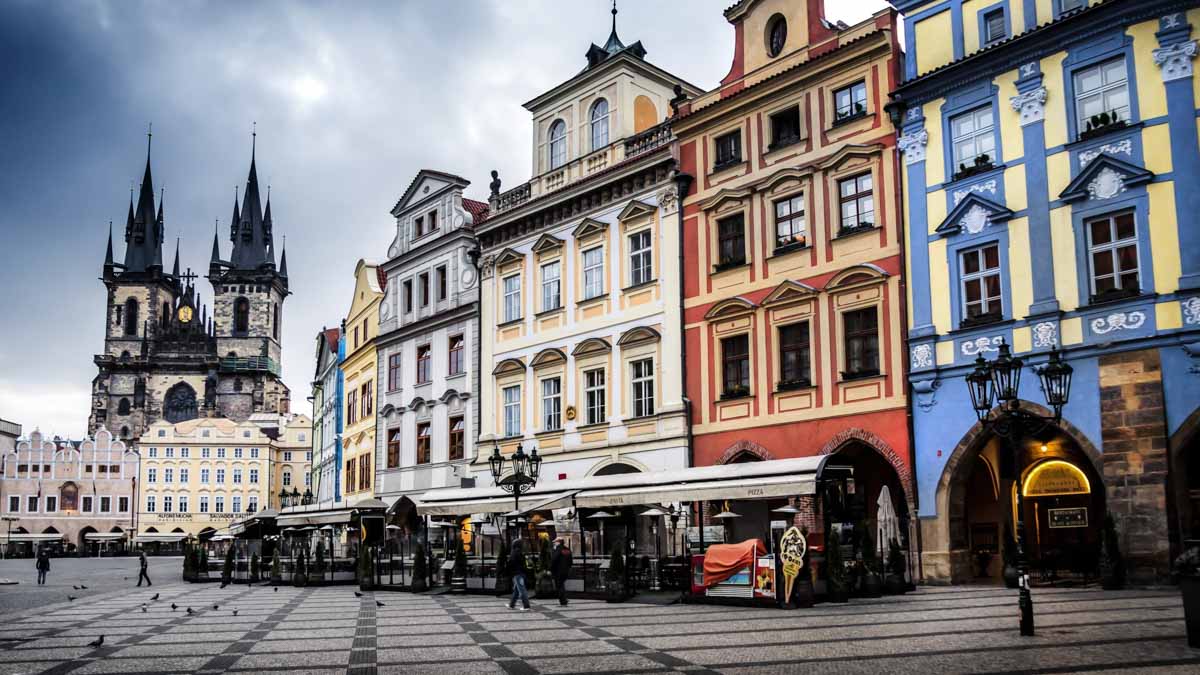 There you can find more information: What to do in Prague if it rains.

Also in Old Town in Prague you will find restaurants and bars that are suitable for every taste and budget. Czech cuisine is rather diverse, so take a chance to experience classic Czech food. In addition, do not forget to accompany it with a glass of famous Czech beer. Throughout all territory of the Old Town are also hundreds of souvenir shops. 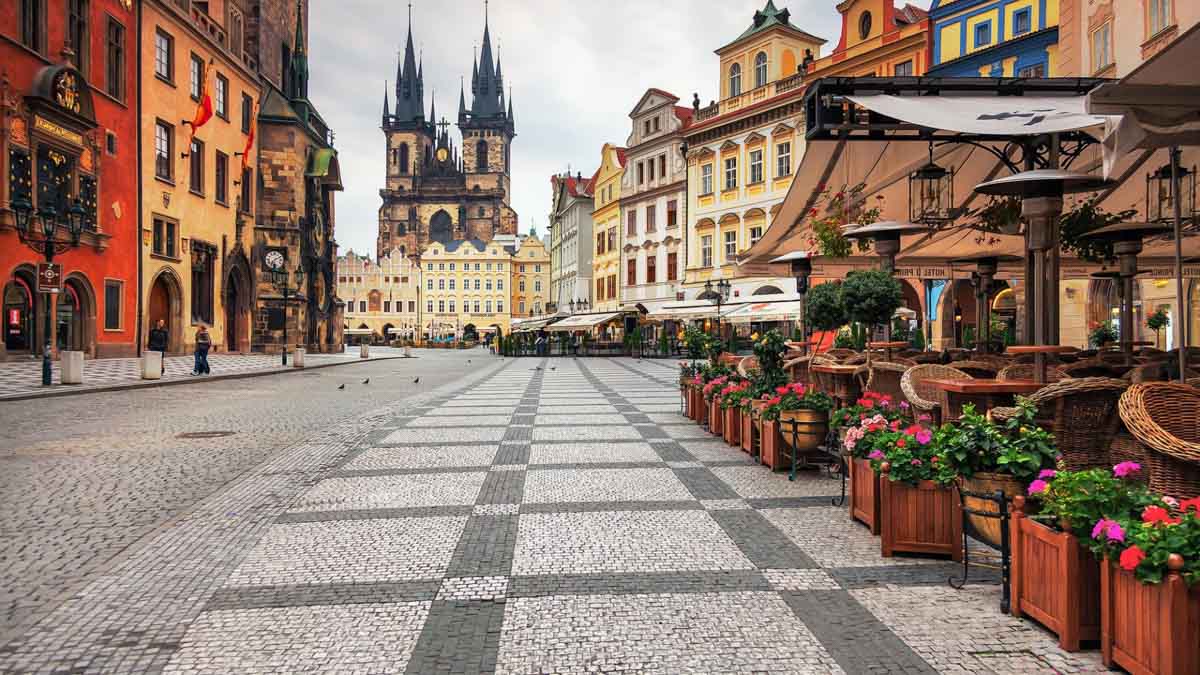 This article includes the history of the Old Town in Prague and main sights located there. I advise you to read also Old Town – the heart of the city about:

If you are not the one who settles for less we offer you Tours with Local Guide. This is a chance to discover every single corner of Prague, with its secrets and unique things only locals know. Besides, it will bring you way more memories and emotions to take back home!